About Us at Mike Fair Chevrolet Buick GMC Cadillac

Mike Fair Chevrolet Buick GMC Cadillac Ltd was established in 1987 by Mike Fair, who began his automotive career at General Motors in Oshawa in the 60’s. His daughter, Kristine Fair, joined him in 2005 after working for various dealers in southwestern Ontario for 25 years. Kristine is now the current owner and dealer principle; Mike sadly passed away in 2015.

At Mike Fair Chevrolet Buick GMC Cadillac, our team is dedicated to providing a sales and service experience like no other and can only be described as ‘famous for fairness’. Regardless of whether you are purchasing a new or pre-owned vehicle, our sales team will treat you just the same; with the respect, transparency, and a simplified process to ensure your overall satisfaction. You will receive this same treatment in our service and parts departments, and collision repair. 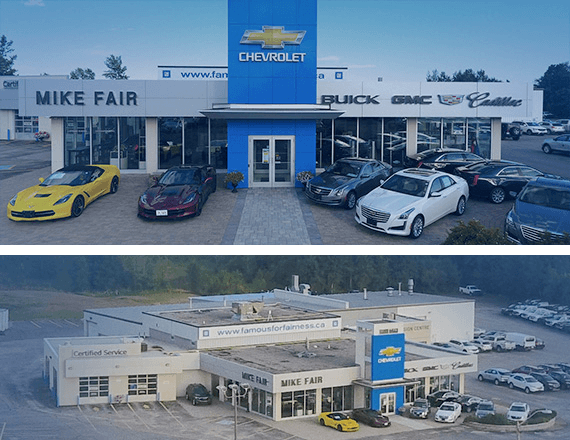 Mike Fair is committed to building strong, long-lasting relationships with all of our customers, regardless of where they live. Many of our customers who no longer live in Eastern Ontario and still buy their cars, trucks or SUVs from us simply because they know what to expect from the team at Mike Fair’s and appreciate the professionalism, courtesy and amazing service they receive. Mike Fair’s combines an impressive selection of new and pre-owned vehicles with a tradition of pressure-free sales and service that has spanned over three decades.

Our business culture is to treat customers as if they were in our own home, to make them feel welcomed.

Mike Fair Chevrolet Buick GMC Cadillac has always been ‘famous for fairness’ and philanthropy. While we are in the business to sell, service, and repair vehicles, we also make it our business to serve the needs of our communities that have supported the company, its employees, and their families since 1987. A strong focus is placed on giving to charities which support our youth, as well as our local hospitals; Big Brothers Big Sisters; Salvation Army; school programs and fundraising; recreational sports teams, and our Chamber of Commerce are a few of those we support. 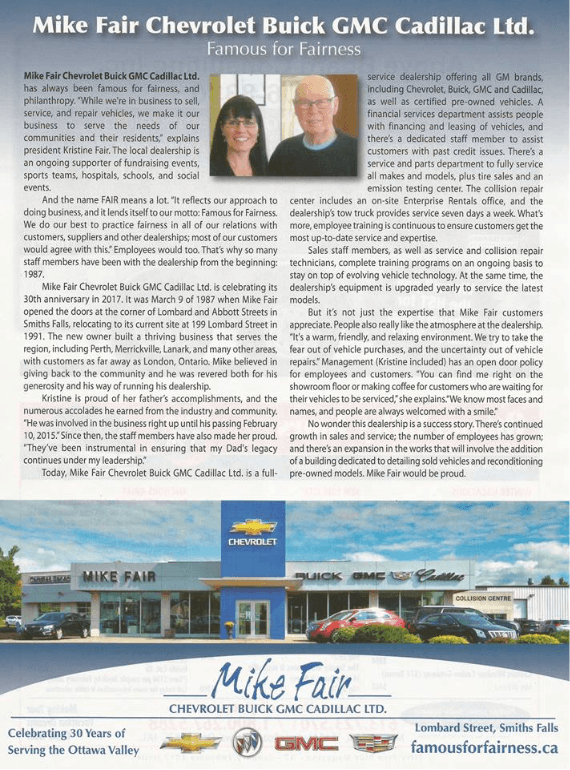 Born and raised in Oshawa, Mike began his automotive career as a teenager, working for General Motors in Oshawa. One anecdote from that period is that he occasionally met R.S. McLaughlin (who started one of the first automobile manufacturing facilities in Canada) in the elevators at GM and they would chat. While working at GM, Mike held several management positions, until he left in 1980 to experience the retail side of the industry when he joined Ontario Motor Sales. While there, Mike operated and expanded its commercial truck centre, selling and servicing both S-10s and Silverado’s, up to 18-wheeler big rigs.

In 1987, Mike purchased a struggling GM franchise in Smiths Falls. Over the next 28 years, Mike developed a reputation as a forward-thinking dealer who served the automobile industry and his community with distinction. 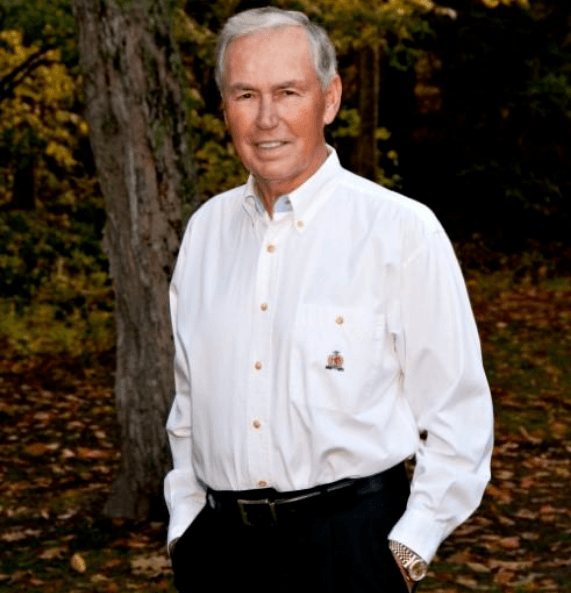 Along the way, Mike was a member of the GM Retail Marketing Board, past president of the OADA, past president of the Smiths Falls and District Chamber of Commerce, and past board member of the Smiths Falls Community Hospital Foundation and Rideau Heritage Museum. He also generously gave his time and financial support to other community projects and organizations, including school playgrounds, Salvation Army, Big Brothers/Big Sisters, the new community arena, Perth and Smiths Falls Hospitals.

One of Mike’s proudest accomplishments was his annual golf tournament for Juvenile Diabetes, which featured Bobby Orr as well as NHL players from Eastern Ontario; it ran for 17 years and raised just under $400,000 (Mike lost his youngest daughter, Merridee, to diabetes in 2009). His contributions were recognized by JDRF in their 2009 annual report. In 1997, Mike earned the prestigious Maclean’s Ontario Dealer of Excellence Award for business acumen, association involvement and community contribution, and in 1999, the Smiths Falls District Chamber of Commerce Businessperson of the Year. His dealership was a three-time GM Triple Crown Award recipient for customer satisfaction, sales volume and service efficiency, and in 2012, Mike received the GM Milestone Achievement Award recognizing 25 years as a dealer. Mike was also was a committed family man who loved spending time at his house on Big Rideau lake with his wife, Wendy, his daughters Kristine and Wendy and stepdaughter, Andrea, his four grandchildren and his many friends. His passion was golf, and he was fortunate to play year round, enjoying their Florida home in the winters. In 2005, Mike’s eldest daughter, Kristine, moved her young family to Smiths Falls and began working with her father. She, too, began working in the industry as a teenager, like Mike, and had worked in several management positions at various dealerships prior to joining Mike. Kristine is a director with the Smiths Falls Chamber of Commerce, and recently joined the board of TADA. As dealer principal at Mike Fair Chevrolet Buick GMC Cadillac Ltd. today, Kristine and her team look forward to meeting the challenges that lay ahead and building and carrying on her father’s legacy in the retail car industry.